North America’s largest bi-national infrastructure project, this bridge scheme underwent a comprehensive environmental assessment (EA) process from 2004-08 that included hundreds of public and stakeholder consultation meetings. This EA process was extraordinary in that, as a cross border project, it satisfied requirements in two different jurisdictions. A Community Benefits Plan is an integral part of the project, creating opportunities to enhance economic, social and environmental conditions for the local communities. The authority engaged in extensive consultation from 2015-17 and again for six months following financial close. It translated its policy into construction through a range of design features, as well as a focus on supporting the local economies through training and apprenticeship programs. The P3 deal has also worked to restore native vegetation, as well as to deliver road and park improvements, home repairs, and provide arts and culture initiatives. This project impressed the judges with its breadth of efforts to improve the communities in which it is operating. The judges praised its ability to deliver its wide range of end-user and community benefits.

USA, This project began full operations in 2014 and since then, a high level of communication between Florida Department of Transportation (FDOT) and the partner has led to several improvements, including cohabitation of the partner’s operators at FDOT’s Traffic Management Center, united with one purpose to “keep the traffic moving safely” not only in the 595 Corridor but also in the network surrounding it. The project has also instigated the successful Road Rangers program, which provides free assistance to stranded motorists and support for incident management 24-hours a day / 7 days a week. A number of important optimizations have also been delivered, such as adding the northernmost section of the I-75 Express Lanes into the I-595 network, creating significant operational improvement and cost savings. The scheme has also ensured a local focus. Since its inception, more than 90% of the workforce has been local, which for a project of this magnitude represents a huge boost to the local economy.

This project won the judges’ backing because of the “obvious successes” it has delivered as well as the long history of strong performance and good track record it has demonstrated. As one judge put it: “The first availability payment based project in the US has also been one of the smoothest.” 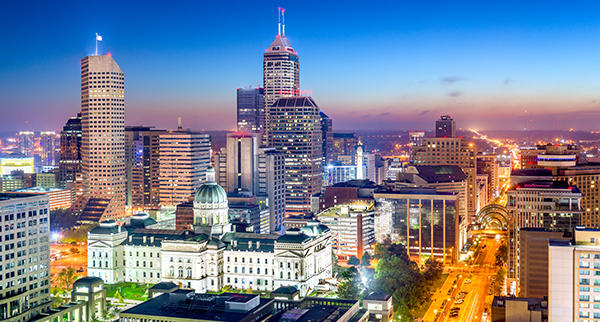 The Indiana Department of Transportation (INDOT) has selected Corradino to lead the I-69 Section 6 Contract 4 CEI project. This 3+ year project is for a 22-mile section of new interstate, with an estimated construction cost of $330 million. INDOT has awarded larger CEI contracts as part of a P3 or Design-Build procurement; however, this Corradino selection represents INDOT’s largest ever stand-alone CEI selection. The project is within INDOT’s Greenfield District, which includes the Indianapolis metropolitan area.

Mike Dew has joined The Corradino Group as Senior Vice-President. He is immediate-past Secretary (June 2017 thru December 2018) and Chief-of-Staff (June 2015 thru May 2017) of the Florida Department of Transportation (FDOT). Prior to serving FDOT, Mike served as Chief of Staff of the Florida Department of Corrections (July 2012 thru December 2014). Those appointments were by then-Governor Rick Scott (now US Senator).

FDOT is consistently recognized as one of the top transportation agencies in the United States. As Secretary, Mike led a number of significant efforts, including developing a new strategy to address the record number of new residents and tourists and their impact on Florida’s transportation infrastructure. He also directed statewide emergency efforts following Hurricanes Irma and Michael, two Category 4 storms that impacted millions of Floridians. At FDOT, he managed over 6,000 employees with an annual budget of over $10.9 billion.

Mike also has a deep background in Presidential politics having served as Chief-of-Staff to the candidate and traveling party of the John McCain for President Campaign in 2008. Prior to that, he served as a Lead Advance Representative for the Bush-Cheney Re-election Campaign, where he managed public events for First Lady Laura Bush.

“This is Corradino’s 49th year in business, and Mike will help lead our future growth” said Joseph C. Corradino, founder and CEO. “We’re excited to have Mike join Corradino and help expand our services and geographic footprint in the industry.”

“Corradino is well-known and respected in the transportation infrastructure business in Florida and elsewhere, and I look forward to being a part of the senior leadership team and helping to expand our operations,” Dew said.

Mike is a native of northwest Ohio and holds a degree from The Ohio State University. He resides in Tallahassee, Florida.

“We’re excited to introduce Gerald as our VP/Division Manager in Tennessee,” said Corradino. “Gerald has been a leader in the Tennessee professional engineering market for over twenty (20) years, and we’re fortunate to have him join the Corradino Team.”

Gerald, a 1996 graduate of Auburn University, has 20+ years of experience in traffic engineering, intelligent transportation systems (ITS), transportation planning, and geometric design. He’s served in management roles for local and national engineering firms and worked closely with the Tennessee Department of Transportation, and several municipalities throughout Tennessee. One of his specialties is ITS, including planning, design, and construction engineering & inspection.

Gerald has lived in middle Tennessee region since 1996 and currently lives in Spring Hill, Tennessee, with his wife, a teacher with Williamson County Schools, and two children.

Gerald is an active member of various professional organizations, including the Intelligent Transportation Society of Tennessee (ITS TN), where he previously served as President and is currently serving as a member of the Board of Directors and the Institute of Transportation Engineer (ITE).

Gerald will lead Corradino’s efforts in Tennessee from their Brentwood office, where Corradino has been providing engineering services for the Tennessee Department of Transportation and municipal governments for many years.

The Corradino Group, Inc. has been providing professional transportation engineering, planning, design, construction management, environmental, and Program Management for over forty-six (46) years, and have overseen some of the largest transportation infrastructure projects in the United States from offices in Tennessee, Florida, Indiana, and Kentucky. Current projects include the $2.3 billion I-4 Ultimate in Orlando, the $850 million I-395 bridge in Miami, the $1.2 billion Broward County Schools Bond Program in Fort Lauderdale, and the $1.8 million expansion of the Fort Lauderdale-Hollywood International Airport.

Gerald can be reached at the Brentwood office (615)372-6972 or gbolden@corradino.com


Each is described below.

TDOT’s Long Range Planning On-Call Contract. This contract’s duration is five years, with a contract ceiling of $1 million. Typical work orders anticipated include complete streets studies, major thoroughfare plans, and other planning studies for communities that are not located within an MPO area.

The Town of Farragut, TN Development Impact Fee Study. The purpose of the Town of Farragut impact fee program is to fund the fair share cost burden of required transportation improvements associated with private development. A sophisticated travel demand modeling approach will be used to estimate the need for additional transportation infrastructure improvements and/or additional transportation capacity. This contract will be a joint effort between Corradino’s Indianapolis and Nashville Offices. In addition to these on-call contract selections, we have been allocated addenda on one of our interstate ramp queue safety studies and the ongoing I-69 Reevaluation and FEIS.